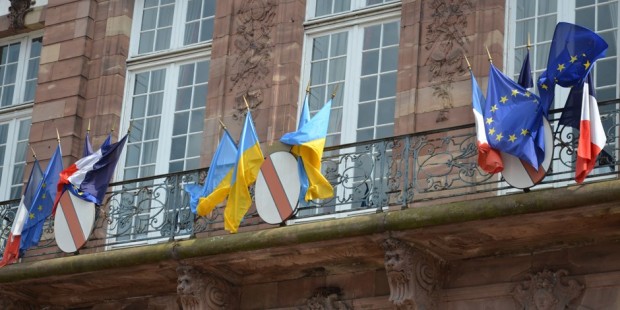 (Elsa Woeffler) – One date, two meanings at opposite ends of the spectrum. While the West celebrates Europe Day and its values, the East celebrates its victory and the surrender of Nazi Germany in 1945. A double meaning, which is not unequivocal today. As the war in Ukraine continues, the Kremlin is preparing to parade its military troops and establish its Russian propaganda on this day of commemoration. The same Russian forces that have been at the front since 24 February, when Russia invaded Ukraine.

Two speeches were expected, the one of Emmanuel Macron at the European Parliament in Strasbourg, but also the speech of Vladimir Putin. A confrontation of two visions of Europe, two speeches for the same date.

“War has returned to European soil”, declared Emmanuel Macron in the Chamber of the 27 Member States on Monday, May 9, 2022. Strong words, pronounced on a key date. Indeed, the Old Continent had not known war on its soil since World War II. The President of the French Republic began by mentioning the Russian-Ukrainian conflict, underlining the courage of the Ukrainian people “(…) the Ukrainian people who fight every day for freedom”, added Emmanuel Macron. Today also marks the end of the conference on the future of Europe. A moment awaited by parliamentarians and other partners.

For Europeans, this date is a reference to the speech made by Robert Schuman which, one year later, led to the creation of the European Union: the European Coal and Steel Community.

A few thousand kilometers from Strasbourg, Moscow. In a brief speech on Red Square, the autocrat repeated that he was defending the interests of the “motherland”. In short, to defend the interests of the pro-Russian separatists who were threatened with a Ukrainian attack, according to the Kremlin. A speech that was expected in the West, but also in Kiev. The announcement of a third World War was one of the most imminent hypotheses put forward by some specialists. However, the Russian president went back on his decision of the Russian offensive by qualifying it as necessary. After the speech, the Russian military parade marched through the streets of Moscow: 11,000 soldiers, dozens of vehicles and troops returning from Ukraine.

May 9 is one of the most important dates in Russian history. Indeed, Stalin had chosen this date of celebration to show that the USSR had triumphed, unlike Nazi Germany.

Before these two speeches, the G7 countries, including Germany, Italy, France and Japan, announced that they would commit to banning, or even phasing out, Russian oil imports. They also added that the Kremlin was “dishonoring” its people. Anyhow, this year, nobody really felt like celebrating…