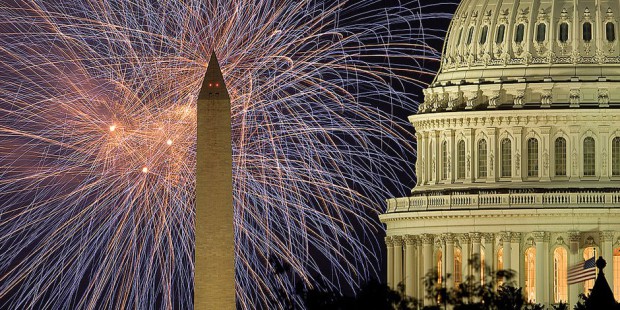 Of course, 4th of July will be celebrated today in Washington, D.C. But not in Europe anymore... Foto: U.S. Capitol / Wikimedia Commons / PD
Tweet

(KL) – As a kid, I lived close to the American District in Bonn-Plittersdorf, Germany. Almost 20 000 Americans, GIs, administrative and diplomatic staff lived in this district and every 4th of July, we went and celebrated with our American friends, with BBQ burgers, coke, grilled marshmallows and we just waited for the big fireworks over the Rhine River which closed the party. But things have changed ever since – today, Europeans do not share the 4th of July celebrations anymore. America is no longer our older brother.

Our youth was strongly influenced by the American culture (well…), the arrival of McDonalds in Germany was a major event. We used to watch the NBA games, we knew every team in the NHL and some of us even got interested in baseball. The USA were always around. They were the “good guys”, the Russians were the “bad guys”, the world was painted in black and white and everything seemed pretty much OK.

Today, Europe watches the USA made great again by Donald Trump with growing concerns. We watch this president travel the world, we hear him say (or tweet) many stupid things, we wonder where his tax wars will lead us and we understand that the world order is about to be dramatically changed. For the better? Who nows…

But the political divorce between Europe and the United States of America also extends to our daily lives. It is no longer cool to wear a Chicago Bulls cap or a Carolina Panthers shirt. American fast-food hast become (thanks God!) a no-go. Less and less people travel to the USA where visitors from European countries are treated like potential gangsters and have to wait for ours in the immigration lines, just to answer the questions barked by unfriendly immigration officers who have the power to simply send you back where you came from, if they are not pleased by your answers.

Donald Trump has built many more walls than just the wall between Mexico and the Land of the Brave. He has planted walls in our heads, which will take much longer to destroy than the one in the south of the USA. The trust in the “good guys” have gone and we live with a growing fear that this president might be the one to trigger World War III, perhaps without even intending to do so, but this wouldn’t matter in the end. In our perception, the USA of Donald Trump are as much or as little our “friends” as Vladimir Putin’s Russia.

We understand that the USA will huddle together with Great Britain and this also puts a stain on the relation between Great Britain and Europe. Everybody mistrusts everybody these days. Sometimes I think of the 4th of July celebrations back in the old days in Bonn-Plittersdorf. And the fun we had celebrating this special day. It would be great to get back to these common celebrations, but this is a mere dream. Today, only London will celebrate with you, perhaps some high level politicians and diplomates. But the times when ordinary people like you and me got together to celebrate the USA and the 4th of July, are over. What a shame.