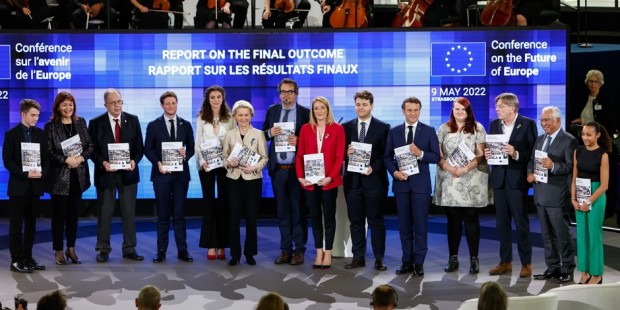 The final report of the Conference on the Future of Europe has been handed over to the leading European politicians. Foto: © European Union 2022 / Source EP
Tweet

(Elsa Woeffler) – The European Union is a unique model. Since its creation, 70 years ago, it has brought together different cultures and countries in a mission of peacekeeping and sharing. Today, the old continent is facing new challenges, such as the Covid-19 pandemic or the war in Ukraine, but also climate change. To respond to these new problems, the European Union had launched the Conference on the Future of Europe one year ago. European citizens were invited to participate in numerous discussion groups to bridge the gap between civil society and the European institutions. On several levels, regional, transnational and European, citizens have been eagerly participating in this exercise of pure democracy. The final meeting took place in the European Parliament in Strasbourg, where 800 European citizens, chosen to best represent European diversity in terms of their origins, age, gender, geographical location and socio-economic background, had final discussion groups in four thematic panels of 200 citizens each, before submitting the final report to the heads of European politics.

For one year, citizens from the 27 member states of the European Union took part in a great number of events and debates on specific themes and subjects. Among others: health, education, youth, migration, democracy, economy, work, but also the place of the European Union in the world. Each member state could propose various events and allow its citizens to discuss these issues. This was a pure exercise in democracy that the 27 member states put in place together with the European institutions. The latter also engaged in a dialogue with the citizens and promoted the various forms of participation involved. The 800 participants of the final event in Strasbourg debated during the three deliberative sessions and brought their observations and requests to the European institutions. More generally, the citizens of the 27 member states could express themselves on a multilingual digital platform. In figures, this represents more than 53,288 participants on the platform, no less than 4,600 events organized and more than 12,000 ideas proposed. This initiative resulted in a final document containing 49 detailed recommendations for over 300 measures.

What happens next? In addition to demonstrating an exercise in pure democracy never before undertaken in the work of building the European Union, the final report was hand-delivered to the French EU presidency, in place until June 30. The French president, Emmanuel Macron, is now in favor of convening a convention to revise the treaties, an idea not shared by already 13 member states who wrote a letter indicating that they consider such a convention not necessary. Indeed, for these proposals to be viable and to be implemented, some treaties need to be reformed since 10% of these proposals modify the democratic functioning of the EU. In the meantime, at the European Council in June, the heads of state of the twenty-seven member states will have to give their first opinion on the report. Then the Commission will do the same, a few months later, in September.

Now, after a year-long investment, the citizens of the various panels that took part in the Conference on the Future of Europe expect commitments from the European institutions. If this exercise is unprecedented since the creation of the European Union, Europe expects actions, but also and above all, more citizen participation from now on.

In a short series to be published on Eurojournalist(e), we will examine some of the major propositions and try to evaluate if and how they can be implemented.