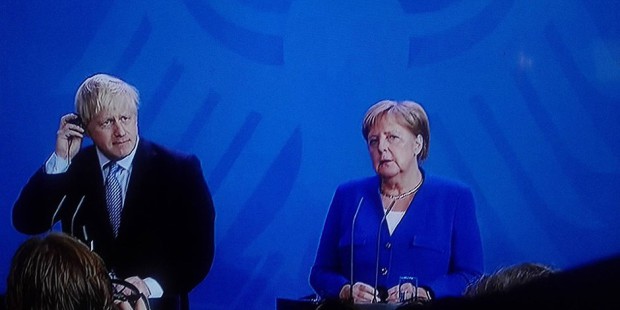 "You can't fool all the people all the time"... but Boris Johnson gives it a try. Foto: ScS EJ
Tweet

(KL) – “Wir schaffen das”, offered Boris Johnson in German to his host Angela Merkel, but this was already the highlight of his visit to Berlin. His lame attempt to convince the German Chancellor to simply drop the “backstop” clause in the Brexit agreement (which has already been rejected three times by the House of Commons) was simply turned down by Angela Merkel. Boris Johnson’s statement that once the “backstop” clause was dropped, it would be possible to “make fast progress”, made Angela Merkel even smile. The perception of time seems to be different between Great Britain and the European continent – for more than three years, the Brexiteers have not developed a single, reasonable concept to avoid the relaunch of the Irish conflict. Angela Merkel and the rest of the European Union are not inclined to renegotiate the already rejected Brexit agreement and, as Angela Merkel stated, “solving the relations between Ireland and Northern Ireland does not exactly belong to the core missions of a German Chancellor”.

Just a few weeks before the final Brexit date and after more than three years of preparation, the British government has still no idea how to handle the Irish question. First bomb explosions have already occurred at the (still open) Irish-Irish border. What should make the European Union believe that Boris Johnson could come up with some genius concepts for the Irish question? The British government did not find any solution in more than three years and Boris Johnson learned something yesterday in Berlin – it is easier to lie to a bunch of elderly Tories than to fool the European Union.

“The European Union”, said Angela Merkel, “is prepared for any case, including the ‘hard Brexit’”. Since the “Yellowhammer” leak, it is common knowledge that this is not the case for Great Britain. The United Kingdom (as long as it is still united…) stumbles into some sort of post-war situation, facing shortages of vital goods, a heavy economic crisis and political isolation. It still is difficult to understand the benefit of this Brexit project and none of the British officials has been able so far to explain anything more serious than “we will be freed from the Brussels tyranny”.

“Great Britain wants an orderly exit from the European Union”, stated Boris Johnson and nobody believed what he said. Worse – the German President Frank-Walter Steinmeier simply commented that this sounded pretty much like an attempt to render the EU responsible for the “hard Brexit” he is aiming for. Angela Merkel was kind enough to explain Boris Johnson in simple words what “backstop” means. As long as Great Britain doesn’t come up with a reasonable solution for the Irish question, the UK shall remain in the Customs Union in order to avoid a EU border across Ireland. “This may take two years or so, but it can also happen within 30 days”, said the Chancellor and this sounded like a mockery after the British government has failed for more than three years to develop even a single, even a bad proposal. “It is a sort of insurance that peace on the Irish island is not jeopardized”, added Angela Merkel and Boris Johnson nodded as if he just had heard about the Irish question for the first time.

It becomes obvious that Boris Johnson doesn’t have the foggiest idea of what might really happen on November 1st. And Frank-Walter Steinmeier was right – the main purpose of Johnson’s visit to Berlin was not to convince anybody of his non-existing plans, but only to be able to tell the British people that he had done everything in his power when the Brexit hits the British people hard in November. But even this strategy is short-sighted. Many experts believe that Boris Johnson wants anticipated elections, but the most recent polls show that both Tories and Labour will be wiped away in case of anticipated elections.

“So, can’t we simply drop the “backstop clause?”, asked Boris Johnson. “Computer says no”, replied Angela Merkel. At least, this is what it sounded like.