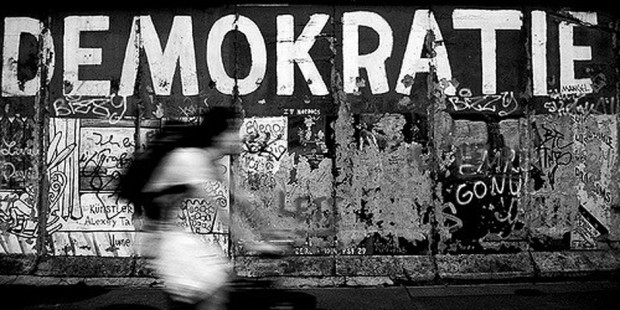 Democracy is something which must be defended, today more than ever. Foto: Maria Langmann / Wikimedia Commons / CC-BY-SA 4.0int
Tweet

(Inès Tempel / CoE) – According to the latest annual report on the state of democracy, human rights and the rule of law across the continent of the Secretary General of the Council of Europe, Marija Pejčinović Burić, Europe is facing a “clear and worrying degree of democratic backsliding“. “In many cases, the problems we are seeing predate the coronavirus pandemic but there is no doubt that legitimate actions taken by national authorities in response to Covid-19 have compounded the situation. The danger is that our democratic culture will not fully recover,” said the Secretary General. “Our member states now face a choice. They can continue to permit or facilitate this democratic backsliding or they can work together to reverse this trend, to reinforce and renew European democracy and to create an environment in which human rights and the rule of law flourish. This is the right option for the 830 million people who live in the Council of Europe area.”

Based on the findings of different Council of Europe bodies, including the European Court of Human Rights, the Secretary General’s report assesses recent developments in areas including political institutions and judicial independence, freedom of expression and association, human dignity, anti-discrimination and democratic participation.

Listed below are some of the many challenges highlighted in the report:

Freedom of expression – The Council of Europe’s Platform to promote the protection of journalism and safety of journalists logged 118 attacks on the physical integrity of journalists across Europe last year. Moreover, the European Court of Human Rights found violations of the human rights convention in 237 of 263 freedom of expression cases between 2018 and 2020. There were also several instances of large-scale blocking of websites in a number of countries.

Freedom of assembly – Many member states have placed restrictions on freedom of assembly as part of the exceptional measures taken to limit the spread of Covid-19. Such restrictions are permissible under the European Convention on Human Rights to the extent that they are lawful, proportionate to the need to protect public health and safety and are non-discriminatory. However, certain groups, notably LGBTI activists, continue to face more general restrictions to freedom of assembly in some countries.

Women’s rights – Covid-19 has had a regressive effect on gender equality, threatening to roll back women’s and girls’ fundamental human rights, putting in stark relief the difficulties many women face in seeking support and protection and increasing exposure to domestic violence; threats and intimidation in the digital sphere have also increased in recent times. Despite the importance of the Council of Europe’s Istanbul Convention for better protecting women from violence, the convention and the rights it defends continue to come under attack. In several countries, strong opposition by some political forces and parts of public opinion has emerged on the basis of false assumptions or deliberate misinterpretations about its possible legal and social implications.

Anti-discrimination – The increase of hate speech and hate crimes against Jews, Muslims, Roma, Black people and other minorities, particularly on the Internet, pose a growing challenge to anti-discrimination, diversity and inclusion policies. Hate speech and attacks against migrants have increased in recent years as a negative reaction to the significant increase in the influx of migrants into Europe since 2015. This also prompted increased support for populist xenophobic movements and political parties.

Corruption and good governance – In some countries, the judiciary’s independence and its authority as a fair and impartial arbiter for all citizens have still not been fully recognised and guaranteed.