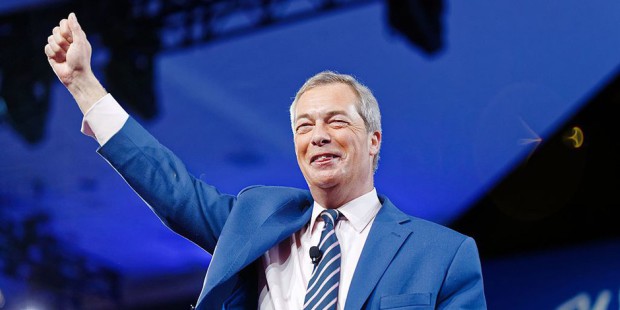 This man is currently making sure that on Brexit day, no friendship will remain between the UK and the EU. Foto: Michael Vadon / Wikimedia Commons / CC-BY-SA 4.0int
Tweet

(KL) – 733 Members of the European Parliament participated in Tuesday’s vote regarding the presidency of the European Commission. Strange enough and in spite of the upcoming Brexit, 31 British MEPs took part in this vote and considering that Ursula Von der Leyen was elected by only 9 votes above the threshold of 374 necessary votes, it is safe to say that the British MEPs largely influenced the result of this vote. Labour and the Liberal Democrats allowed Ursula Von der Leyen to access the most important job in European politics and the new German president will still be in office when the British MEPs have already gone. What was this? Some sort of farewell gift?

All this becomes ridiculous. Watching Nigel Farage and his Brexit blockheads sitting in the European Parliament, behaving in a shameful and insulting manner, being aggressive and arrogant, is a slap in the face of the European Union. Having them participate in votes which will determine the future direction of the European Union is a bad joke – they should have had the decency to just sit there, cash their generous salaries and shut up.

What is the point in spending the remaining months (granted by the so much hated European Union – if one recalls, the original Brexit date was March 31, but given the incapacity of the British Parliament to decide what exactly Great Britain wants, this date has been pushed back several times to allow the British government to come to a clearer position…) establishing new tensions between Great Britain and the European Union? Do the Brexiteers really think that they will be better off by establishing animosities that will prevail for years?

Would the Britons allow European delegates to participate in the Brexit votes in Westminster? Of course not. But then again, everybody seems to consider normal that the British MEPs may participate in European votes of such an importance.

Just for you to remember: without the generosity of the EU institutions, Great Britain would already have to cope with the consequences of a “hard Brexit” which would have occurred on March 31. But the European Union tried to avoid any hardship to Great Britain and granted further and further extensions of the delay. Is this now the British way to thank Europe for the patience and cooperation in the most stupid political project Great Britain has ever seen?

So, thank you very much for having falsified the Tuesday vote in the European Parliament. Thank you for having crowned Ursula Von der Leyen as the future Number One of Europe. Thank you for hindering the European Union to enter a reform process which would be needed so badly. Thank you for leaving us with an all-German domination of the European Union. And you know what – we will remember the terrible role Great Britain played in this crucial situation for the future of Europe. It is unbelievable that the British phlegm goes as far as leaving the future of your country to a bunch of brainless neo-nationalist who don’t care for your country, for Europe, for anything. You will be leaving the European Union soon. The EU tried hard to make this a farewell between friends. It is a shame that the Britons allow the Farages, Mays, Johnsons and all the others to make sure that there will be no friendship left on the day of your departure. Let’s hope that October 31 arrives soon – the sooner Europe gets rid of the Brexit blockheads, the better.