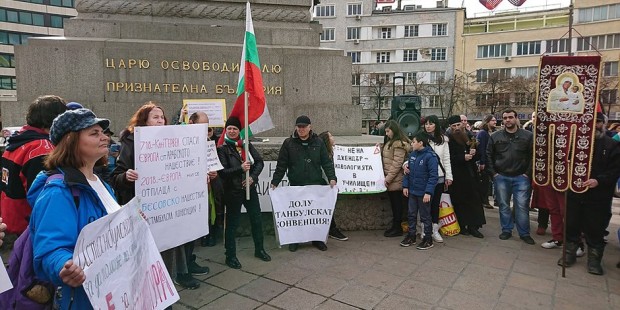 This is stunning - protesters in Sofia, Bulgaria, who raise their voices AGAINST the Istanbul Convention! Foto: User:ivanov id / Wikimedia Commons / CC-BY-SA 4.0int
Tweet

(CoE / Red) – In a joint statement to mark UN International Women’s Day, German Federal Minister for Family Affairs, Senior Citizens, Women and Youth Franziska Giffey and Council of Europe Secretary General Marija Pejčinović Burić highlight the 10th anniversary of the Council of Europe’s Convention on preventing and combating violence against women and domestic violence, better known as the Istanbul Convention, since it was opened for signature in Istanbul in 2011.

Significant progress has been achieved to stop such violence, with 34 countries having acceded so far to the Convention, and also because successful monitoring in half of these countries has led to much cooperation and sharing of best practices. But “half” also means that the other half is still not in the process of implementing the basic procedures outlined in the Convention – and in some of these countries, the road to a less violent society still seems long.

But obstacles and challenges – from increased calls to domestic violence hotlines during Covid-19 lockdowns and restrictions, to political movements against the Convention based on false interpretations of its goals – must be faced with determination.

Minister Giffey and Secretary General Pejčinović Burić set forth the goal for the next 10 years – and preferably sooner – that all 47 Council of Europe member states accede to the Convention.

The Istanbul Convention is another example of the paramount importance of the Council of Europe. This convention is not about “political communication” and “scoops”, but it aims at a long term change of inacceptable habits. The fight against domestic (and other forms of) violence must be a top priority for all European institutions – the Council of Europe shows, once again, the way.