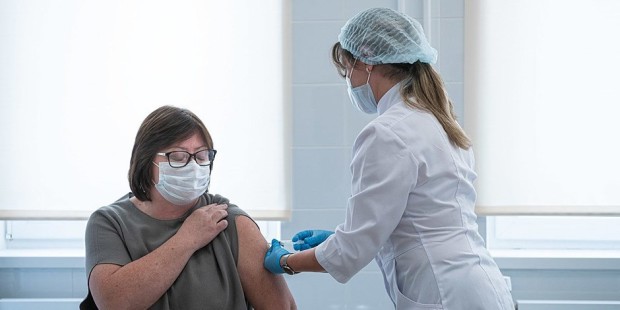 The best vaccine is useless unless there is a real and efficient vaccination strategy. Foto: mos.ru / Wikimedia Commons / CC-BY 4.0
Tweet

(ESMH / Red) – Interview with Melinda Mills, Director of the “Leverhulme Centre for Demographic Science” at the University of Oxford and lead author of the British Academy and Royal Society report on Vaccine Deployment. She calls for open dialogue about vaccine concerns and the need to help people spot misinformation.

How did the Vaccine Deployment report come about and what are the main findings?

Melinda Mills: I am part of SET-C (Science in Emergencies Tasking – COVID-19) a group set up by the Royal Society to respond to requests for rapid science advice on current and future problems tackling the pandemic from the Government Office for Science (UK).

To date, the main focus has been on developing and distributing COVID-19 vaccines. Now, we need to think about deployment and behavioral reactions to that deployment.

The report systematically reviews scientific evidence on vaccine uptake. We found five behavioral factors affecting vaccine uptake (the 5 ‘C’s): convenience, people have to be able to access it easily, be able to take time off work, for example; complacency, a large number of people are unlikely to take the vaccine because they don’t feel at risk; confidence, lack of trust in the safety of the vaccine; context, different groups (ethnic, sociodemographic, religious) interact differently with vaccines; and communication, there is a need to move away from passive communication to a dialogue around the new vaccines.

There will be multiple vaccines against COVID-19 and people have a legitimate knowledge void and questions that need to be answered. The report calls for open dialogue, not just about safety concerns but also about ethics and equity in vaccine allocation.

The report also looked at anti-vaxxers, misinformation and conspiracy theories. Back in February, the WHO Director-General Tedros Adhanom Ghebreyesus announced that we are not just fighting an epidemic but also an infodemic. We found that misinformation around vaccines is characterized by: distrust of science, pharmaceutical companies and governments; the use of simplistic straightforward explanations, like ‘it makes you infertile’ a statement that went around for a long time before it was banned; the use of emotion and personal narratives; and ‘echo chambers’. As online platforms are designed to tailor content to individual interests and beliefs, there is a polarization that exacerbates and reinforces misunderstanding about scientific facts.

How should misinformation around vaccines be tackled?

MM: The report offers several policy recommendations for dealing with this such as empowering the public to spot misinformation and raising the accountability of media companies because these messages are a risk to public health. Companies are still waiting for misinformation to be reported, they are being reactive rather than pro-active.

There has also been some discussion about bringing in legislation against those who spread misinformation, but I don’t think this is the best approach. It creates martyrs, which is not useful in this situation. Helping people understand that if they get a vaccine they can protect themselves, their families and communities so we can get back to normal sooner, is probably a more powerful tactic than legislation.

A study in the US showed that around 40% of people that retweeted or re-shared misinformation on Facebook didn’t realize that they were spreading misinformation. Twitter now warns users before liking or retweeting posts that they haven’t actually read the article in an attempt to make people stop and think rather than randomly share information.

As the development of COVID-19 vaccines progresses, has there been a surge in anti-vaccination messages?

MM: These messages are pretty persistent and come in waves, such as when Andrew Wakefield falsely linked the MMR vaccine and autism in the 90s. Anti-vaxxers have been around since the 1850s when the smallpox vaccine was first introduced. Interestingly, their pamphlets contain virtually identical messages to the ones we see today on social media.

Although the groups currently supporting anti-vaccination may have changed, their arguments are strikingly similar to those used in the 1800s. It’s almost like there is a playbook of how to do this. The claims made back then include: that the vaccine causes illness in children, that immunity is temporary, that they are poisonous, that they are the result of alliances between medical science and government to make profit, that they go against basic rights and civil liberties, and that alternative medicine is the solution. The parallels are striking.

Simple and terrifying messages such as ‘an mRNA vaccine changes your genetic material’, which isn’t the case, are exactly the type of thing that anti-vaxxers will focus on and amplify. These vaccines have gone through the same trials and regulation processes to prove their safety and efficacy as other vaccines.

What is required for COVID-19 vaccine deployment to be successful?

MM: Transparency is the only thing that builds trust. It is really important that governments, vaccine developers and regulators are very transparent about everything. Working at a local level, with local communities and groups, is also key because rumors can spread quickly and have a large impact on uptake.

We need to respect people’s emotions and understand their concerns rather than be reactive and provide one-way communication. Tool kits should be developed to support dialogue and reach diverse populations. All this takes time and has to be financed at a time when most economies are facing unprecedented recessions. However, I think everyone is very keen to get back to normal and will be motivated to get vaccinated.

I am concerned that governments are putting up information on vaccines on government websites rather than engaging with people who might be less likely to get vaccinated and who will not be going to these sites. It is also important to remember that not everyone will be getting the vaccine straight away so there will be social distancing, social bubbles, face coverings, …for a long time.

At the moment, we are thinking about vaccination at the national level and keep hearing about the number of vaccines each country has bought, forgetting the global south. Global coordination and equal access are crucial to end the pandemic.

You’ll find more information about the European Science Media Hub by clicking on this link!