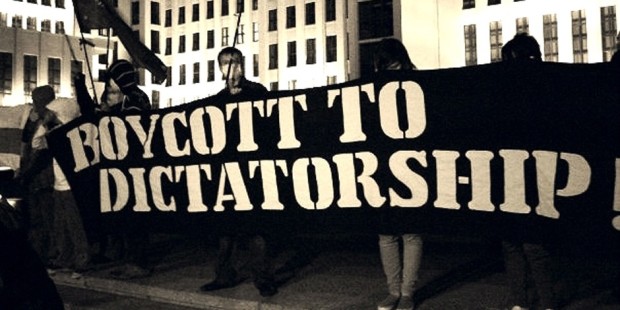 For many years, Belarus citizens claim for an end of the Likaschenko dictatorship. Foto: Isabel Sommerfeld / Wikimedia Commons / CC-BY 2.0
Tweet

(CoE / Red) – Following the Presidential election in Belarus, Council of Europe Parliamentary Assembly (PACE) President Rik Daems expressed his deep concerns about the situation in Minsk and other cities in Belarus. “I have been following closely the Presidential election in Belarus as well as the events of last night following the closing of the vote”, said Rik Daems, “I deeply regret that this election was far from being free and fair.”

Candidates were not able to run and campaign freely, there have been severe restrictions on freedom of assembly and freedom of expression – including widespread detentions of peaceful protesters, activists and journalists – and the integrity of early voting has been called into question.

“The events of last night”, stated Rik Daems, “including the use of force by the police and the military as well as the detention of protesters, aggravate my concerns. I urge the authorities to show utmost restraint and to ensure unhindered exercise of fundamental human rights and freedoms in accordance with Belarus’ international obligations and commitments. Freedom of expression and of peaceful assembly are an essential pillar of democratic societies and a necessary condition for a pluralist and democratic political process.

I particularly applaud the courage and determination of Belarus’s women, who have actively participated in the political process as leaders, campaigners and engaged voters, despite sexist remarks that have being voiced throughout the campaign. Such dismissive language, as PACE has repeatedly made clear, has no place in modern politics.

The Assembly has long urged the authorities in Belarus to move towards a “truly competitive political system” in which parties and candidates can register and campaign without hindrance, and voters can make free and informed choices.

Belarus applied to join the Council of Europe in 1997 but, due to lack of democratic progress, this process has been frozen for some years. Nevertheless, the rights and freedoms of the Belarusian people remain an objective for the Council of Europe and, despite the fact that this election has been deeply disappointing, the guardian of European values continues to believe that one day, European democratic values will fully prevail also in Belarus.

It is important that the Council of Europe takes such a clear position towards what is happening in Belarus. Other countries, such as Russia and China, just congratulated president Lukaschenko for his “victory” and carry on with their “business as usual”. Once again, the Council of Europe shows who really defends democratic values in Europe.