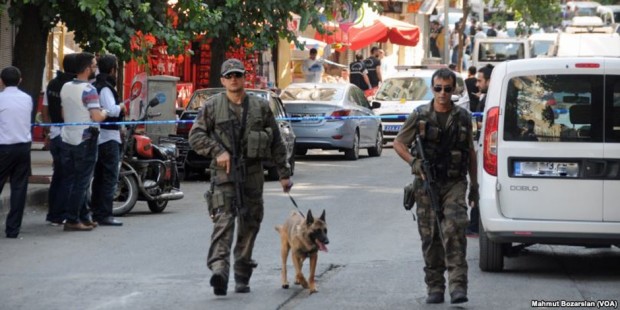 Soldiers and policemen are exercising permanent pressure on members of the opposition and the civil society in Turkey. Foto: Mahmut Bozarslan (VOA) / Wikimedia Commons / PD
Tweet

(CoE / PACE / Red) – PACE’s Monitoring Committee has strongly condemned new crackdowns on political opposition and civil dissent in recent months in Turkey and urged the Turkish authorities to “take meaningful steps” to improve standards in the field of democracy, rule of law and human rights.

“Unfortunately, the overall situation has not improved since 2019,” the committee concluded. In addition, many of the issues cited in 2017, when the Assembly re-opened the monitoring procedure for Turkey, “remain a matter of concern in 2020”, it said.

In its draft resolution, the committee listed a detailed series of steps it expected the authorities to take in three different areas – the functioning of democratic institutions in Turkey, the rule of law, and respect for human rights.

The committee said it remained “confident of the ability of the Turkish people and authorities to address and redress the deficiencies in the field of democracy, human rights and the rule of law, provided there is a strong and genuine political will to do so”. It also praised Turkey’s “vibrant civil and political society, which is genuinely committed to democracy”.

The committee also noted that “serious concerns” had been raised over Turkey’s external actions, including military operations, and resolved to include this issue in its next reports.

The report is due to be debated by the “enlarged” Standing Committee of the Assembly on Friday 23 October. The meeting, which takes place by teleconference, will be live-streamed on the website of the Assembly.