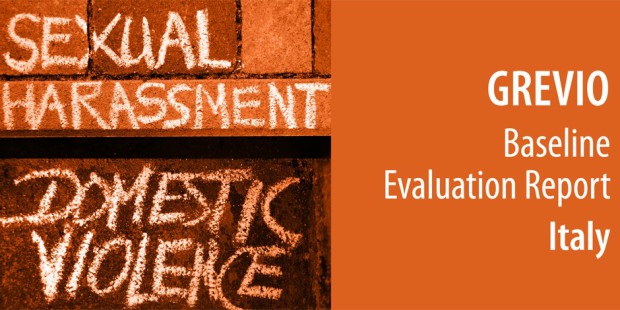 Italy has made some progress within the "Istanbul Convention", but much more needs to be done. Foto: Council of Europe / Europa / 2020
Tweet

(CoE / Red) – In its first report published yesterday on implementation by Italy of the “Council of Europe Convention on Preventing and Combating Violence against Women and Domestic Violence”, known as the “Istanbul Convention”, the Group of Experts GREVIO welcomes a succession of legislative reforms with concrete actions to stop violence.

Some of these legislative initiatives made considerable headway, such as the legislation of 2009 on stalking, or the adoption of Law No. 119/2013 which formalised the authorities’ duty to support and to promote, including by attributing financial means, a vast network of support services for victims. Law Decree No. 80/2015 granting women victims of violence special paid leave and Law No. 4/2018 containing several measures in favour of orphans of a victim of domestic violence were also particularly innovative.

While acknowledging progress made to promote women’s rights, the report highlights that the cause of gender equality is facing resistance in the country with emerging signs of a tendency to reinterpret and refocus gender-equality in terms of family and motherhood policies.

In the area of victim protection and support, the report considers that as a matter of priority, the national authorities need to develop appropriate funding and further solutions offering a co-ordinated multi-agency response to violence based on the strong involvement of local authorities and the participation of all the stakeholders concerned, including in particular women’s NGOs providing shelters for victims. Further measures are urgently needed, with a human rights-based approach, to fill the gap in the provision of specialist support services for victims of sexual violence in the form of rape crisis and/or sexual violence referral centres.

Several legislative reforms, including the recent Law No. 69 of 19 July 2019 (known as the Red Code) have led to the development of a solid legislative framework in line with the requirements of the convention on the civil and criminal law remedies for victims of violence. Nevertheless, the report finds a number of legislative gaps such as that caused by the absence of effective civil remedies against any state authority that has failed in its duty to take the necessary preventive or protective measures within the scope of its powers.

Another area requiring urgent consideration by the authorities is that relating to the determination of custody and visitation rights. The report finds that existing provisions in the law which would allow giving priority, in cases of violence against women, to the best interest of the child over and above the principle of shared parenting are rarely used. In its report, GREVIO expresses its concern about the tendency of the system in place to expose to secondary victimisation mothers who seek to protect their children by reporting the violence.

In the field of asylum, the report finds that failures of vulnerability assessments to properly detect victims can lead to deportations or returns in violation of the obligation of non-refoulement. Recent policies of abandoning sea rescue and strengthening deterrence at sea, together with the closure of Italian ports to boats carrying rescued migrants, further increase the risk of refoulement. GREVIO therefore urges the authorities to uphold their obligation to respect the principle of non-refoulement and the human rights of victims rescued at sea.

Finally, GREVIO calls on Italy to take the following measures as a priority:

* ensure an application of the legal provisions on the offence of ill-treatment in the family which is sensitive to the gendered nature of domestic violence against women;
* ensure that policies and measures equally address prevention, protection, investigation and punishment, in accordance with the due diligence standard enshrined in Article 5 of the Istanbul Convention;
* take further measures to ensure that policies address violence against women in a comprehensive and integrated fashion and are implemented and monitored by way of an effective co-ordination between national, regional and local authorities;
* ensure appropriate financial and human resources for measures and policies, while increasing the transparency and accountability in the use of public funds and developing appropriate long-term/multi-annual financing solutions for women’s specialist services;
* reinforce the support and recognition of independent women’s organisations and strengthen the national and local institutional framework for consulting and co-operating with women’s organisations;
* provide a strong institutional basis for the bodies mandated to ensure the implementation and co-ordination of measures and policies to combat violence against women and pursue efforts to enable an effective monitoring and evaluation of policies;
* reinforce preventive actions in the fields of awareness-raising, education, training of professionals, perpetrator programmes and the employment sector, while pursuing proactive and sustained measures to promote changes in sexist social and cultural patterns of behaviour that are based on the idea of inferiority of women;
* step up victims’ access to general support services which are adequately distributed throughout the territory, properly resourced and provided by trained staff members.

However, even if the GREVIO report asks Italy to do more and better, it does not mean that Italy is the worst European country regarding the implementation of the “Istanbul Convention” – the reports about the other member states will follow and chances are that almost none of the member states (perhaps with the exception of the Scandinavian countries) currently complies with the rules set out in this convention.