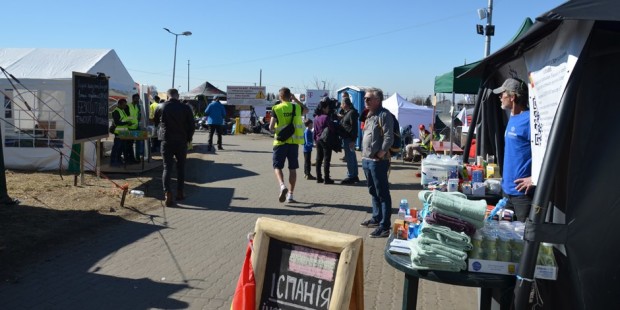 Support from all over the world for the Ukrainian refugees flocking in to Poland. Foto: Elsa Woeffler / EJ / CC-BY-SA 4.0int
Tweet

(Elsa Woeffler, from Medyka, Poland) – It is a string of tents representing a number of associations from all over the world: Humanity First, the Polish Red Cross or The Jewish Agency, many humanitarian associations have mobilized to help Ukrainian refugees.

Indeed, the Medyka border post, in the south of Poland, is one of the nine nerve centres where thousands of people try to flee the Russian threat every day. In order to ensure their arrival on Polish territory, NGOs, but also private volunteers flock to provide support. Donations, help with administrative procedures, psychological support, everyone is pitching in. In this distressing situation that is the Russian-Ukrainian conflict, a flame of hope tries to illuminate the border post of Medyka. 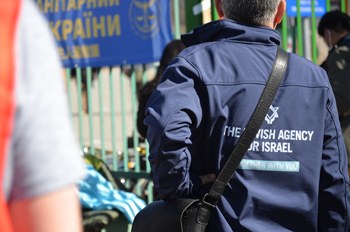 Some of them have travelled through several countries, by plane or even by car, unable to do anything, others have taken personal leave to come here “I saw a call on the social network Facebook and I decided to go, I took a leave, took a plane and here I am”, explains Christophe, a firefighter coming from Nice, France. A surge of solidarity that also includes some associations. “I was told that the volunteers were overworked in Medyka, as I am part of an association, I proposed to some volunteers and we went there, it’s my second trip at the moment !”, exclaims a retired French dental surgeon. A strong symbol of peace in the face of the atrocity that takes place twenty kilometers away, in the city of Lviv in Ukraine.

However, some are confronted with a too large influx of volunteers. Sometimes individuals who are not attached to any organisation or association are refused their help, as the associations have enough people to function. “I come from Touraine, I have come all the way here and I cannot help because there are enough people, I am a bit disappointed”, explains Slava, a French woman of Czech origin. Indeed, there are sometimes a few disappointments on arrival, but that doesn’t dampen the motivation of the volunteers who have come from all over the world. “I made the journey, I brought back donations and that’s the most important thing, because it’s with little drops that an ocean is formed”, adds the young woman.