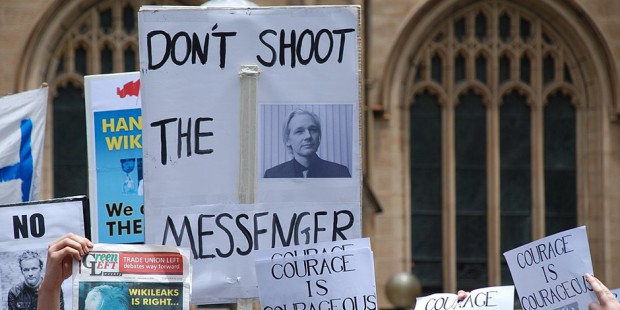 (KL) – In the end of the day, it doesn’t really matter if the United States sentence Julian Assange to 175 years in prison or if they send him onto the electric chair. Whatever it will be, Julian Assanges life will end the very moment the British authorities decide to send him ti the United States. His “crime”? Having informed the world about criminal activities within governments and Big Business. We all owe him, so the least we can do is to send him a short note of solidarity and to exercise pressure on our MPs in every single country of the world urging them to do whatever they can to stop this extradition which is nothing else than the capital sentence.

For almost 10 years, Julian Assange is victim of a plot hatched by US, British and Swedish authorities. Framed by a more than questionable rape indictment in Sweden, where two women claimed having been raped by Assange at the same time, the world famous whistle-blower and founder of WikiLeaks spent 8 years in the Ecuadorian embassy in London, until Ecuador cracked under US pressure and allowed the British police to arrest Assange in this embassy. Jailed for some almost ridiculous pretext related to his status as an alien (Julian is Australian citizen), Julian Assange has become a trade token between Great Britain and the USA. Sweden has withdrawn from this outrageous case, considering that the “rape” allegations were perhaps not solid enough to pursue this case. But none should forget that Assange was framed by Swedish citizens and authorities – how easy it seems now for the Swedish government to wash its hands…

Julian Assange is in an utmost critical condition. The years of isolation and detention have left traces and his lawyers and other people close to Julian give worrying reports about this physical and mental condition. It is time to say “thank you” and express our solidarity, directly to Julian Assange, before it is too late. He still is in a British prison and it might be of comfort to Julian learning that he is not forgotten and that there are people around who care. So, please write him a short letter and tell him what you want to tell him. The attached visual explains exactly how to proceed to make sure your letter arrives in his hands.

Besides a personal letter to Julian Assange, please urge your local, regional, national and European MPs to take action. The European Union must put Great Britain under pressure – 2018 was the “Year of the whistle-blower” in the EU and if a European country extradites a whistle-blower to the United States, there must be severe sanctions on the responsible government. Even if this government just happens to quit the European Union.

The European Union must offer political asylum to Julian Assange, and to do so, it is urgent to create such a “European Asylum” for cases like this (or Edward Snowden, another victim of the lacking European attitude). If the British authorities decide to sentence Julian Assange, there will be boycott calls on everything related to Great Britain.

To write to Julian Assange, please follow carefully the instructions below, without missing any of the indicated steps. If you hope for a reply, purchase British stamps for the return envelope on the Internet, but please bear in mind that the only reason for writing such a letter, is to support Julian Assange and not to receive a collector item in return…

And urge your MPs to loudly claim the only possible solution for the “Assange case” – FREE JULIAN ASSANGE. NOW! 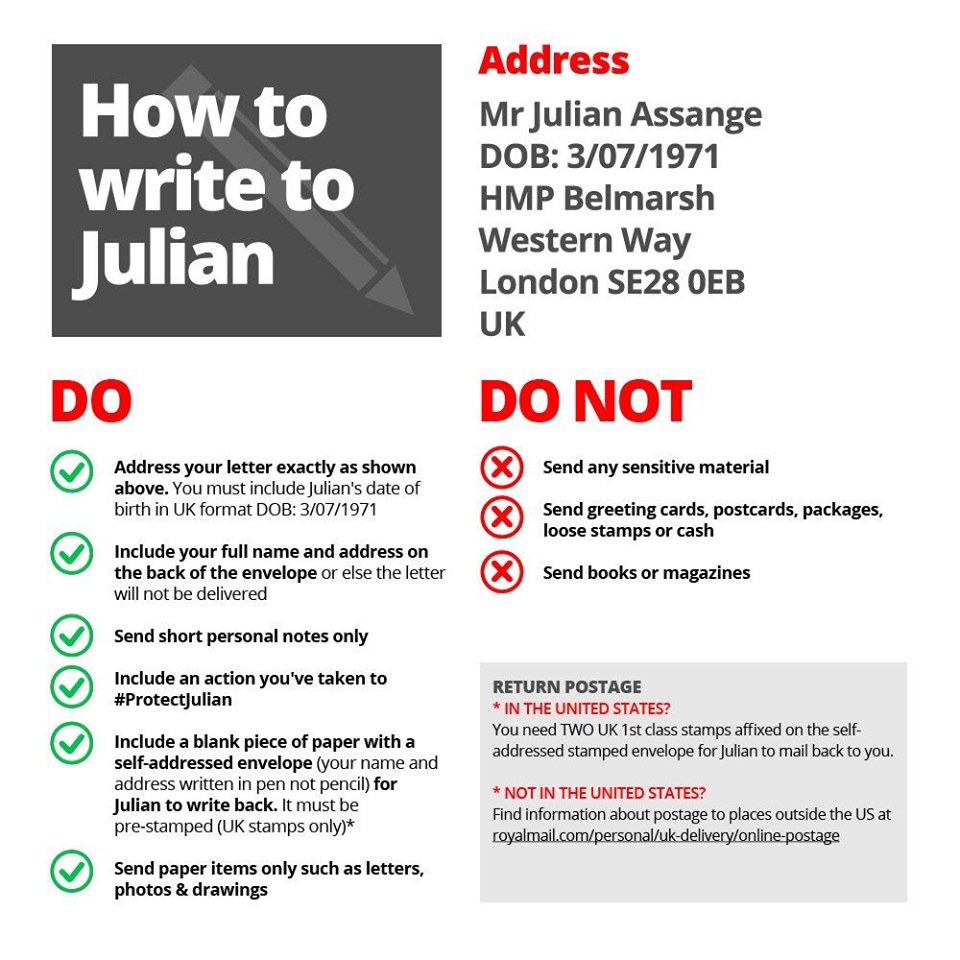